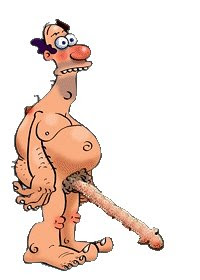 When I first noticed that my penis was growing larger And staying erect longer, I was delighted, as was my wife.

But after several weeks, my penis had grown fifty centimeters.

I became quite concerned. I was having problems dressing, and even walking

So the wife and I went to see a prominent urologist.
After an initial examination, the doctor explained to us that, Though rare, my condition (Donkey Doodle,) could be fixed through corrective surgery.

'How long will he be on crutches?' my wife asked anxiously.

'Crutches? Why would he need crutches?' responded the surprised doctor.
'Well,' said the wife coldly, 'you're gunna lengthen his legs, aren't you?'
Posted by The Joker at 9:06 AM