A laugh for the day! - Miscommunication

A co-worker got a pen stuck inside our printer. He started to try and remove the pen, but I told him we don't have time for that now, just put a note on the printer telling folks not to use it and then report it to the Help Desk. So he grabbed a piece of paper and scribbled on it.

I'd left before he finished the note.
*
About 20 minutes later, one of my techs comes in laughing and says he was just in the lobby, saw a piece of paper on a printer and went to investigate. 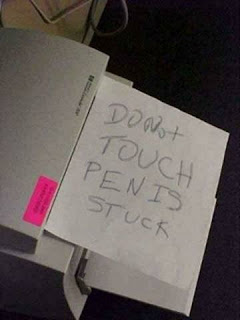